The source code of this tutorial is in book/recommender_system. For new users, please refer to Running This Book .

With the continuous development of network technology and the ever-expanding scale of e-commerce, the number and variety of goods grow rapidly and users need to spend a lot of time to find the goods they want to buy. This is information overload. In order to solve this problem, recommendation system came into being.

We use a dataset containing user information, movie information, and movie ratings as a recommendation system. When we train the model, we only need to input the corresponding user ID and movie ID, we can get a matching score (range [0, 5], the higher the score is regarded as the greater interest), and then according to the recommendation of all movies sort the scores and recommend them to movies that may be of interest to the user.

YouTube is the world’s largest video uploading, sharing and discovery site, and the YouTube Personalized Recommendation System recommends personalized content from a growing library to more than 1 billion users. The entire system consists of two neural networks: a candidate generation network and a ranking network. The candidate generation network generates hundreds of candidates from a million-level video library, and the ranking network sorts the candidates and outputs the highest ranked tens of results. The system structure is shown in Figure 1:

The candidate generation network models the recommendation problem as a multi-class classification problem with a large number of categories. For a Youtube user, using its watching history (video ID), search tokens, demographic information (such as geographic location, user login device), binary features (such as gender, whether to log in), and continuous features (such as user age), etc., multi-classify all videos in the video library to obtain the classification result of each category (ie, the recommendation probability of each video), eventually outputting hundreds of videos with high probability.

First, the historical information such as watching history and search token records are mapped to vectors and averaged to obtain a fixed length representation. At the same time, demographic characteristics are input to optimize the recommendation effect of new users, and the binary features and continuous features are normalized to the range [0, 1]. Next, put all the feature representations into a vector and input them to the non-linear multilayer perceptron (MLP, see Identification Figures tutorial). Finally, during training, the output of the MLP is classified by softmax. When predicting, the similarity of the user’s comprehensive features (MLP output) to all videos’ features is calculated, and the highest score of $k$ is obtained as the result of the candidate generation network. Figure 2 shows the candidate generation network structure. 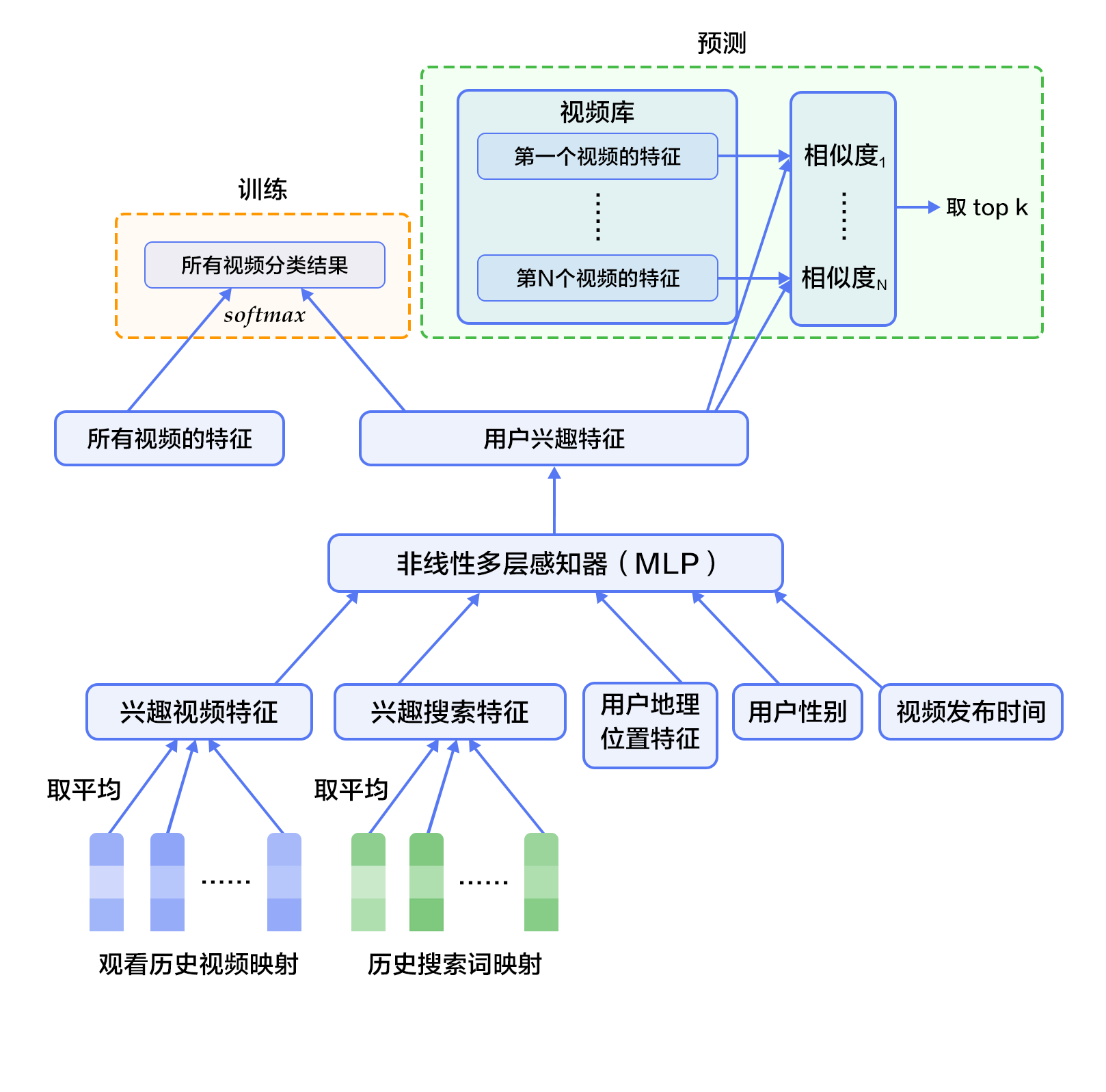 For a user $U$, the formula for predicting whether the video $\omega$ that the user wants to watch at the moment is video $i$ is:

Considering that the number of categories in the softmax classification is very large, in order to ensure a certain computational efficiency: 1) in the training phase, use negative sample category sampling to reduce the number of actually calculated categories to thousands; 2) in the recommendation (prediction) phase, ignore the normalized calculation of softmax (does not affect the result), and simplifies the category scoring problem into the nearest neighbor search problem in the dot product space, then takes the nearest $k$ video of $u$ as a candidate for generation.

The structure of the ranking network is similar to the candidate generation network, but its goal is to perform finer ranking of the candidates. Similar to the feature extraction method in traditional advertisement ranking, a large number of related features (such as video ID, last watching time, etc.) for video sorting are also constructed here. These features are treated similarly to the candidate generation network, except that at the top of the ranking network is a weighted logistic regression that scores all candidate videos and sorts them from high to low. Then, return to the user.

This section uses Convolutional Neural Networks to learn the representation of movie titles. The convolutional neural network for text and the fusion recommendation model are introduced in turn.

The convolutional neural network is mainly composed of convolution and pooling operations, and its application and combination methods are flexible and varied. In this section we will explain the network as shown in Figure 3:

Suppose the length of the sentence to be processed is $n$, where the word vector of the $i$ word is $x_i\in\mathbb{R}^k$, and $k$ is the dimension size.

Next, using the max pooling over time for feature maps to obtain the feature $\hat c$, of the whole sentence corresponding to this convolution kernel, which is the maximum value of all elements in the feature map:

Paddle provides modules for automatically loading data in the API. The data module is paddle.dataset.movielens

For example, one of the movie features is:

This means that the user ID is 1, female, and younger than 18 years old. The occupation ID is 10.

Among them, the age uses the following distribution

The occupation is selected from the following options:

For each training or test data, it is

For example, we get the first training data:

Below we begin to configure the model based on the form of the input data. First import the required library functions and define global variables.

Then define the model configuration for our user feature synthesis model

As shown in the code above, for each user, we enter a 4-dimensional feature. This includes user_id, gender_id, age_id, job_id. These dimensional features are simple integer values. In order to facilitate the subsequent neural network processing of these features, we use the language model in NLP to transform these discrete integer values ​​into embedding. And form them into usr_emb, usr_gender_emb, usr_age_emb, usr_job_emb, respectively.

Furthermore, we make a similar transformation for each movie feature, the network configuration is:

The title of a movie is a sequence of integers, and the integer represents the subscript of the word in the index sequence. This sequence is sent to the sequence_conv_pool layer, which uses convolution and pooling on the time dimension. Because of this, the output will be fixed length, although the length of the input sequence will vary.

Finally, we define an inference_program to calculate the similarity between user features and movie features using cosine similarity.

Furthermore, we define a train_program to use the result computed by inference_program, and calculate the error with the help of the tag data. We also define an optimizer_func to define the optimizer.

Define your training environment and specify whether the training takes place on CPU or GPU.

We have constructed a training process here, including training optimization functions.

feed_order is used to define the mapping between each generated data and paddle.layer.data. For example, the data in the first column generated by movielens.train corresponds to the feature user_id.

The training program and the test program are separately constructed, and the training optimizer is imported.

Use the API of create_lod_tensor(data, lod, place) to generate the tensor of the detail level. data is a sequence, and each element is a sequence of index numbers. lod is the detail level’s information, corresponding to data. For example, data = [[10, 2, 3], [2, 3]] means that it contains two sequences of lengths 3 and 2. Correspondingly lod = [[3, 2]], which indicates that it contains a layer of detail information, meaning that data has two sequences, lengths of 3 and 2.

In this prediction example, we try to predict the score given by user with ID1 for the movie ‘Hunchback of Notre Dame’.

Building the prediction process and testing¶

Now we can make predictions. The feed_order we provide should be consistent with the training process.

This tutorial is contributed by PaddlePaddle, and licensed under a Creative Commons Attribution-ShareAlike 4.0 International License.