The source code of this tutorial is in book/recognize_digits. For new users, please refer to Running This Book .

When we learning programming, the first program we write is generally to implement printing “Hello World”. But the tutorial of machine learning or deep learning for the beginner is usually handwriting recognition on the MNIST database. Because handwriting recognition is a typical classification problem, relatively simple and the MNIST dataset is complete. MNIST dataset as a simple computer vision dataset contains a series of pictures and corresponding labels of handwriting digits. The picture is a 28x28 pixel matrix, and the label corresponds to 10 numbers from 0 to 9. Each picture has been normalized in size and centered in the position.

Figure 1. Example of a MNIST picture

MNIST dataset is created from NIST Special Database 3（SD-3) and Special Database 1（SD-1). Because SD-3 is labeled by stuff of US Census Bureau and SD-1 is labeled by US high school students, so SD-3 is clearer and easier to be recognized than SD-1. Yann LeCun et al. pick half of SD-1 and half of SD-3 as train dataset (60000 data) and test dataset (10000 data).250 annotators labeled the training set, thus guaranteed that there wasn’t a complete overlap of annotators of training set and test set.

MNIST attracts scholars to train model based on the dataset. In 1998, LeCun conducted experiments respectively using Single layer classifier, Multilayer Perceptron and Multilayer convolutional neural network LeNet, constantly decreasing the error on test dataset ( from 12% to 0.7%)[1]。 In the process of research, LeCun, the pioneer in the field of deep learning, came up with Convolutional Neural Network, largely improving the performance of handwriting recognition. After that, researchers take a large number of experiments based on K-Nearest Neighbors algorithm[2], SVM[3], Neural Network[4-7] and Boosting method[8] and so on, with multiple pre-processing methods(like distortion removal, noise removal, and blurring) to upgrade accuracy of recognition.

Convolutional Neural Network plays an important role in the field of deep learning now. From simple LeNet proposed by Yann LeCun in early days to model VGGNet, GoogleNet, ResNet and so on in the ImageNet competition (please refer to Image Classification tutorial ), we have gain a serious of great achievements with convolutional neural network in the field of image classification.

In this tutorial, starting from simple Softmax regression model, we help you learn about handwriting recognition and introduce you how to upgrade model and how to use MLP and CNN to optimize recognition result.

To train a classifier based on MNIST dataset, before the introduction of three basic image classification networks used in this tutorial, we first give some definitions:

The simplest Softmax regression model is to get features with input layer passing through a fully connected layer and then compute and ouput probabilities of multiple classifications directly via Softmax function [9].

The data of the input layer $X$ is passed to the output layer. The input $X$ is multiplied by weights $W$ and then added to the bias $b$ to generate activations: 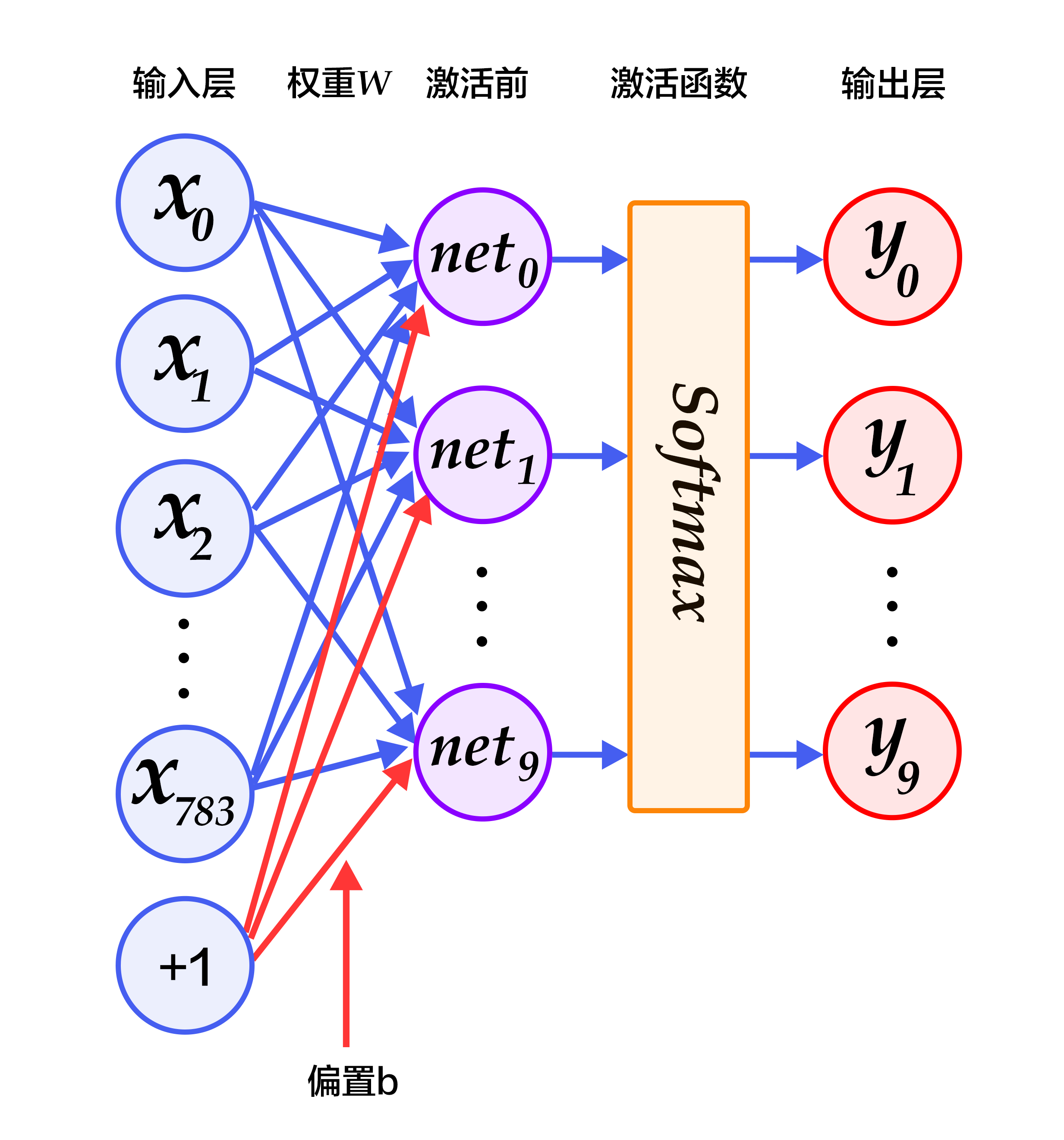 For an $N$-class classification problem with $N$ output nodes, Softmax normalizes the resulting $N$ dimensional vector so that each of its entries falls in the range $[0,1]\in {R}$, representing the probability that the sample belongs to a certain category. Here $y_i$ denotes the predicted probability that an image is of number $i$.

In the classification problem, we usually use cross-entropy loss, the formula is as follows:

The Softmax regression model uses the simplest two-layer neural network, which contains only the input layer and the output layer, so its performance is limited. In order to achieve better recognition, we consider adding several hidden layers [10] between the input and output layer. 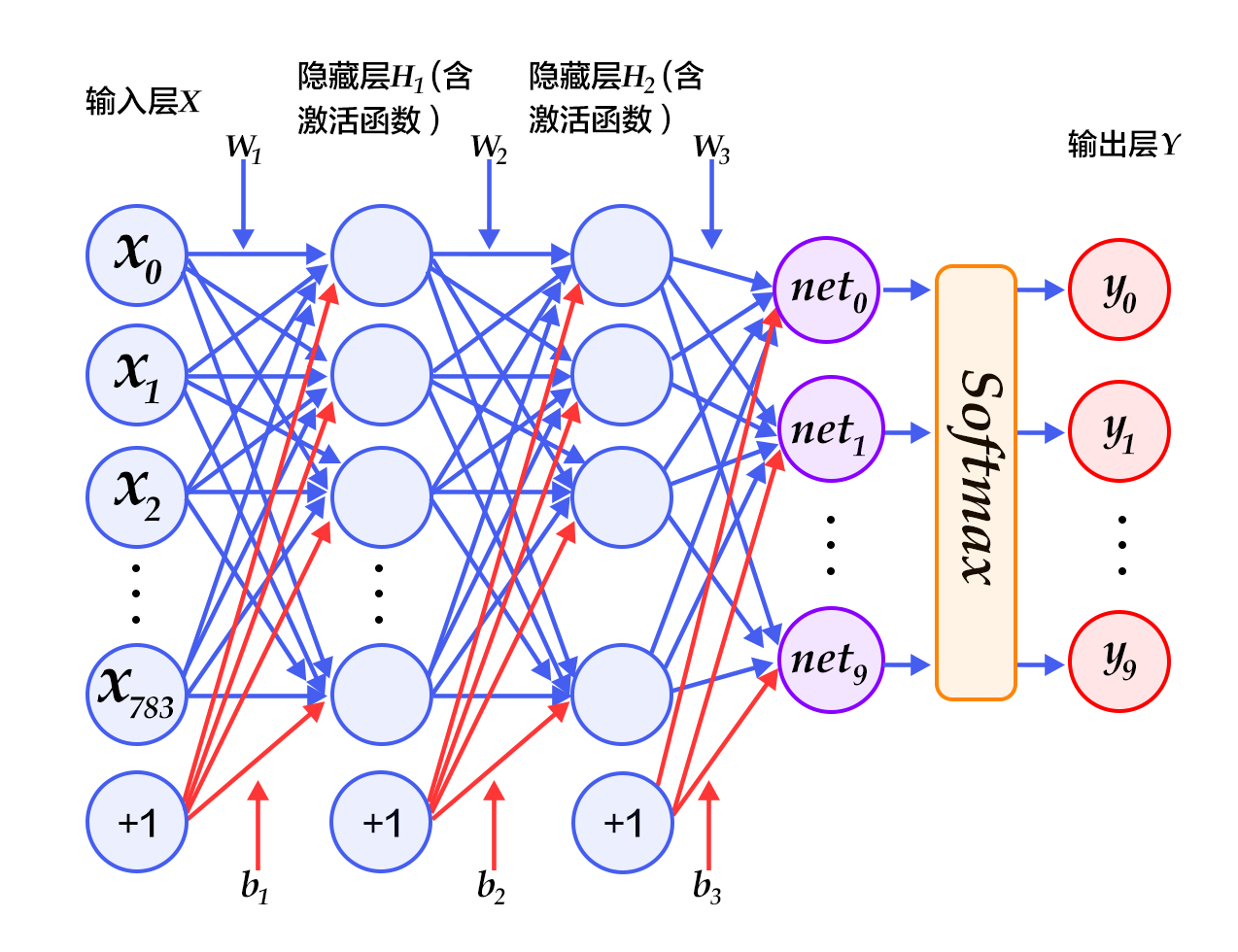 In the multi-layer perceptron model, an image is expanded into a one-dimensional vector and input into the network, ignoring its position and structure information. And the convolutional neural network can better utilize the structure information of the image. LeNet-5 is a relatively simple convolutional neural network. Figure 4 shows the structure: the input two-dimensional image, first through the two convolutional layers to the pooling layer, then through the fully connected layer, and finally using the softmax as the output layer. Below we mainly introduce the convolutional layer and the pooling layer. By introducing the calculation process of convolution and its features, convolution could be seen as a linear operation with shift-invariant, which is the same operation performed at each position of the image. The local connection and weight sharing of the convolutional layer greatly reduce the parameters that need to be learned, which helps with training larger convolutional neural networks.

For more information about convolution, please refer to Reference Reading。 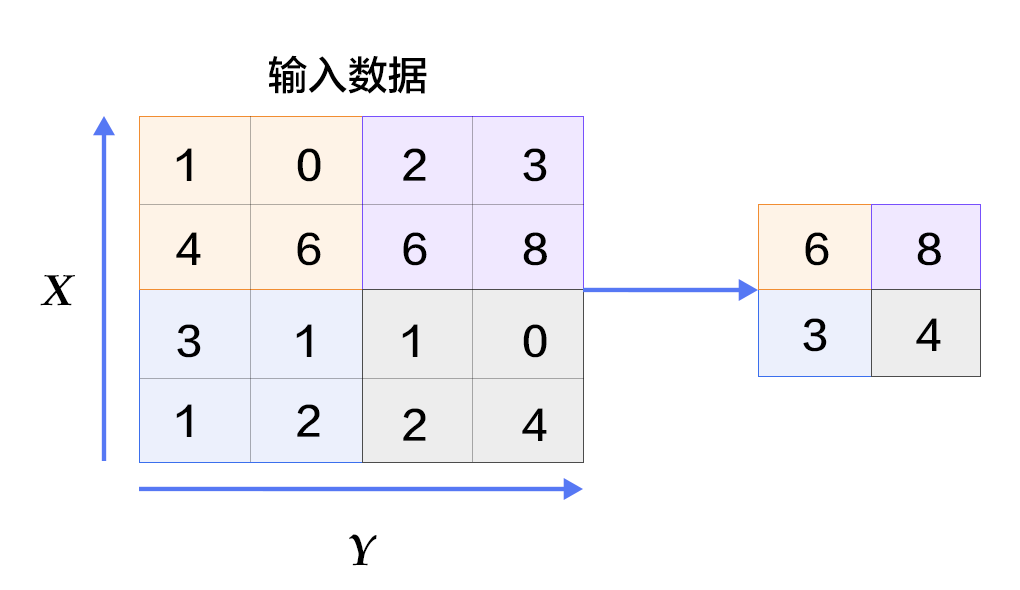 Pooling is a form of nonlinear downsampling. The main functionality of this layer is to reduce computation by reducing the network parameters and to control the overfitting to some extent. Normally a pooling layer is added after the convolutional layer. Pooling includes maximum pooling, average pooling and so on. The largest pooling is to divide the input layer into different areas by non-overlapping rectangular boxes, and the maximum value of each rectangular box is taken as the output layer, as shown in Figure. 6.

For details about convolutional neural network, please refer to the tutorial of Standford Online Course, Ufldl and Image Classification.

For details, please refer to activation function in Wikipedia.

PaddlePaddle provides a module paddle.dataset.mnist that automatically loads [MNIST] (http://yann.lecun.com/exdb/mnist/) data in the API. The loaded data is located under /home/username/.cache/paddle/dataset/mnist:

The demo will use the latest Fluid API. Fluid API is the latest PaddlePaddle API. It simplifies model configuration without sacrificing performance. We recommend using the Fluid API, which is easy to learn and use to help you complete your machine learning tasks quickly.

Here is an overview of several important concepts in the Fluid API:

In the code examples below, we’ll take a closer look at them.

We need to configure inference_program function. We want to use this program to show three different classifiers, each of which is defined as a Python function. We need to input the image data into the classifier. Paddle provides a special layer layer.data for reading data. Let’s create a data layer to read the image and connect it to the network of classification.

-Softmax regression: The results of the classification can be obtained only through a simple layer of simple fully connected layer with softmax as the activation function.

Then we need to set train program train_program It firstly infers from classifier. During the training, it will compute avg_cost.

** Note:** train program should return an array. The first parameter returned must be avg_cost. The trainer uses it to compute gradient.

Please write your code and then test results of different classifiers of softmax_regression, MLP and convolutional neural network.

Adam optimizer，learning_rate below are learning rate. Their size is associated with speed of network train convergence.

Shuffle below is a reader decorator, which receives a reader A and returns another reader B. Reader B read buffer_size train data into a buffer and then the data is disordered randomly and is output one by one.

Now we need to create a training process. We will use train_program, place and optimizer defined before, conclude test loss in the period of training iteration and training verification and save parameters of model for prediction.

Event_handler is used to output training result during the train

event_handler_plot can be visualized as follows:

Aftering adding event_handler and data reader we configured, we can start to train the model. Set parameters for operation to configure data description. Feed_order is used to map data directory to train_program Create a train_test reflecting the loss during our training.

Configure hyper parameter during the training:

Compute the mean loss and accuracy of classification after an epoch.

Check prediction accuracy of the model after training. In the train with MNIST, generally classification accuracy of softmax regression model is about 92.34%, while that of multilayer perceptron is 97.66% and that of convolutional neural network is 99.20%.

Generate input data to be inferred¶

infer_3.png is an example picture of number 3. Transform it into a numpy to match feed data format

By configuring network and training parameters via load_inference_model, We can simply insert classifier defined before.

Softmax regression, multilayer perceptron and convolutional neural network are the most basic deep learning model, from which complex neural networks are all derivative, so these models are helpful for later learning. At the same time, we found that from simple softmax regression transform to slightly complex convolutional neural network, the accuracy of recognition on MNIST dataset largely increased, resulting from that convolution layer is featured with local connection and sharing weight. When study of new models later, hope you make a deep understand of the key upgrade of new model compared with original model. In addition, this tutorial also talks about the basic steps to build PaddlePadle model, from the code of dataprovider, build of network to training and prediction. Familiar with the work flow, you can use your own data, define your own network model and finish your training and prediction tasks.

This tutorial is contributed by PaddlePaddle, and licensed under a Creative Commons Attribution-ShareAlike 4.0 International License.